A friend suggested I write on this topic. While I’m usually averse to divulging views about more personal stuff, I’ll take her up. I’ve been 30 for five days now, so I’m qualified.

Dating used to be carefree. Two people were or attracted and interested in each other, and that was that. But aging brings complications, as we feel we must at least give a look down the road. Do I like this person enough to bother, or am I taking away from her/my prime years? It’s unfair, but women have serious complications in pregnancy after 35. Meanwhile, men can look hot with salt and pepper hair. Nature is a motherfucker.

Also, people all around us are acting decisively. As you’ve seen on Facebook, people are married. Nothing makes people freak out like a celebration of love. I suspect some people get married mostly for the Facebook status and the accompanying flood of pictures. These pics are the ultimate “humble brag,” proof the couple are socially well adjusted, evidence they will not die alone. I’m all for connubial bliss, and nobody roots for love like I do. Joyce: real love loves to love love. But single people can be comforted by considering how many marriages are filled with despair.

It’s well known that 50% of marriages end in divorce, meaning half of marriages are outright failures. But what of this other half? They fall somewhere between love at one happy end and I’ve-made-a-huge-tiny-mistake.

Starting everyday beside someone terrible can be avoided by prudence and patience while single. Many think looking for a “serious relationship” is the sensible, mature course of action, but finding a life mate is not just another thing to cross off the to-do list. It must be done right. Life is long. Judges consider “life” 25 years but it’s actually longer, meaning marrying the wrong person can lead to a lengthier imprisonment than murder.

The thing is not to look for a serious relationship, but to find a serious love. It’s hard to talk about love without sounding sentimental and corny, which is why in art it’s so often depicted horribly. It’s also wildly personal, so there’s no general way to talk about it, but maybe some things to keep in mind.

Compatibility is often thought of in positive terms—someone who accentuates your strengths. But don’t pick someone too high above you! It’s about balance. Don’t spend life paranoid and insecure about your better looking, richer, more charming partner. Compatibility might mean selecting someone as ugly, broke and dull as you. It’s not like you reach a verdict on a potential mate by consciously entering each variable into some kind of formal ledger, but you’ll probably be mutually attracted to someone who, if such a ledger were created, would come out about equal.

There are two related forces working against people finding real love: the unconscious evolutionary drive beckoning to just mate already, and social pressure. This latter world has different looks: your relatives asking if you’ve scheduled the start of a family, movies and TV about these problems, and of course advertising, which is itself a maelstrom of lies valuing love only because married people have predictable purchasing patterns (diamond ring, a home, stuff for the home, baby products, etc.)

Genuine concern for, or even acknowledgement of, an individual’s heart and soul is by definition banished from both these worlds, but these forces motivate many people all the same. So find someone who either does or doesn’t transcend this stuff to the same degree you do. Don’t be more or less self-actualized than the person you’re seeing.

Leo’s famous intro “All happy families are alike, but all unhappy families are unhappy after their own fashion” [Maude translation] sounds wonderful, until you think about it. Happiness has unlimited variations. 40-year-old Tolstoy was actually a proponent of the traditional nuclear family, and he thought passionate follow-your-heart Anna was just an alleyway skank, sympathizing instead with her steadfast, dull ex-husband. Later radical Tolstoy opposed pre and post-marital sex, joining him with other great thinkers like Dr. Tobias Funke.

In closing, in dating, chill. Not just because relaxing is less stressful than not relaxing. Chilling is crucial. When you focus hard inwardly, not only do you take care of your own life but you give off that I-don’t-give-a-shit vibe that’s powerful so long as you really don’t give a shit. Authenticity is key. It can’t be faked. Women call guys immature sometimes for not pro-actively seeking a serious relationship, but it might just be that they don’t give a shit in the way described above, and thus aren’t necessarily frivolous about matters of the heart.

And if you dodge trashy idiots, dating is basically just drinking, eating and talking with people who might be tolerable, even if you don’t instantly fall in love. Single people generally sleep alone and have to endure the stigma of being the single ones at parties filled with couples. This is nothing compared to how bad a bad marriage one can be.

At the base of Florence’s Duomo is a shockingly graphic depiction of hell inspired by Dante’s Inferno. Various ghastly devils cackle with laughter while engaging in heinous acts of violence: bashing human skulls in with clubs, impaling people with tridents, flaying naked people alive. Hellfire sizzles in back. This is the great Florentine poet’s allegory for daily life in a bad marriage. You don’t see this side of marriage a lot because, for some reason, people don’t post these pictures on Facebook. 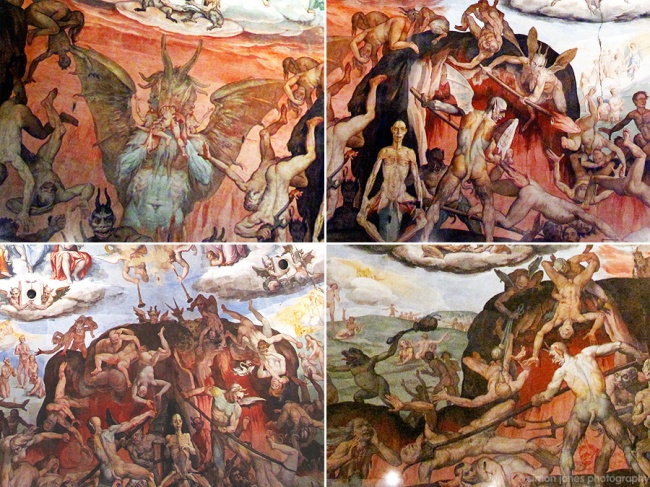