I feel elated to have hockey back in my life again. Puck was too fundamental to my childhood, adolescence and also adulthood to feel alien now, but a lot has changed.

The feeling of knowing Saturday night will begin again with puck is incredible. But the Leafs are different. They are good! Actually! Being a Leaf fan is to be emotionally fragile about them, and I’m trying not to invest feelings, but having dominant players to root for is a pleasant shock.

In India I didn’t mourn the loss of puck. I was busy and very stimulated and the absence of puck had no impact on my life for the first year. But after about twelve months it was playoffs, and the Leafs were in. I woke up at 3:30 am, lit some charras and watched the best pro hockey I’ve seen in probably 15 years. Matthews. The timing, and the place of it, was strange, but once the puck dropped it was like riding a bike.

I had contacted the Canadian embassy in Delhi to see if I could attend their NHL playoff screening, but they responded that not only couldn’t , no such screening existed. Why even have an embassy, then? They didn’t explain this either. They recommended I buy some Rogers service to stream the game. No, I felt safe from Rogers this far away and refused to let them gouge me, so I streamed it online, which was surprisingly reliable.

In the past, when any regular season let alone playoff game was on, I could be heard screaming abuse at players and refs in a room by myself. The players, too, in the 90s-early 2000s mirrored my insane intensity. They sometimes spat in the face of opposing players face, then jumped in their bench and punched this same face. One major strain of NHL hockey was real sheer burning hatred, and this was released not by outscoring opponents but by beating the shit out of them. This satisfied me, because even if we didn’t win the Cup, and we most certainly didn’t, at least we won a round or two and hurt some rats.

From the bit I’ve seen, NHL hockey has softened enormously and the results are spectacular. A Leaf collided with a Sen last night, and instead of a facewash or chirp or a hack or slash, they each seemed concerned for the other’s well being. Then they just…moved on. Look: the truth is these are obscenely overpaid and obscenely talented kids playing a game they love. What team they play for is arbitrary. It’s a game. I used to think a human being’s character and moral worth was solely determined by what team drafted them–it’s hard to believe I was ever so stupid. (Actually, is it?) Refs now are actually enforcing the rules of hockey, instead of allowing them to be skirted by enforcing The Code of the game, and now hockey games are won by playing hockey. Goonery seems gone, and I don’t miss it a bit. 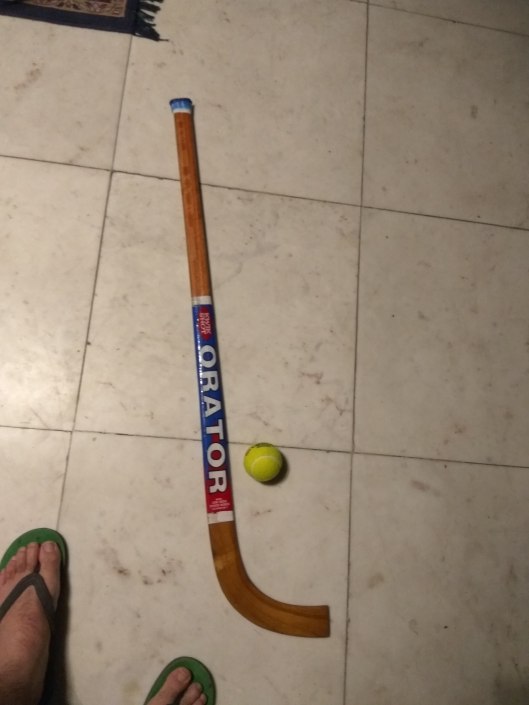 I just returned from playing my first ice hockey game with full equipment, goalies and refs and all, in probably 7 years. And that game was my first in years, too.

I bought real twigs the other day! I told the gentleman at Sport Check I needed help, because the equipment all seemed so new. There were no Easton Aluminums, Koho or Titans. There were no Sakic curves. They’ve been composite for years, but even when I was playing shinny I had a wooden twig. The knowledgeable employee told me things I find incredible. All sticks have very large curves now, no heel curves. “It’s all about the sauce these days.” He means saucer passes, raising the puck on a pass over an opponents’ fore-checking stick so it lands on the other side for a teammate. Skill.

Skates cost between $89-1000 (About 5,000 to 50,000 Rupees!). Skate sharpening now isn’t just sharpening a blade, there are different kind of cuts, with ratios that apparently do mean something to players who can tell the difference. The advances in gear are substantial—sticks/skates are impossibly light, they flex to your foot, skates are protective (if you have money, otherwise break a foot blocking a shot, you poor bastard you deserve a broken foot), the helmets even apparently are better.

At the rink today a sign proclaimed: “Relax, it’s just a game.” This was not the messaging I heard as a kid. Don Cherry taught that the failure to block a shot or forcefully clear the front of the net was a national disgrace. I’m not sure it ever occurred to me that hockey was only a game. There were duties, often semi-violent to violent. I took it oddly seriously as a 12-14 year old, my golden-era as a select player. I was a good house league player until 19, ie mediocre to decent in the actual world.

Today I played with some buddies and had an incredible time. I was gassed halfway through the first (maybe a quarter way), but took some late rushes as a D man, made a few passes, deeked a few people, got burned on some odd man rushes going back (it was not a cerebral lapse, I was pinching because I just didn’t have the juice in my legs to get back and accepted it then and now), and we won 5-2. Their goalie made a few surprisingly good saves on me when I went roof, but I got an apple. I didn’t have my head up with the puck to know where guys were, I felt behind in that respect. But made some good and unexpected passes. And botched some. It was kind of a blur. I couldn’t believe that once ice-time was something I desperately wanted more of. Oh my god. Winning the game was second to making it out alive. 17-15-15 minute periods, stop time and only two full lines. Killer.

But this time a teammate talked about his kids. The parents at my game were not watching from the stands they were on my team. Playing puck as an old bastard is extremely chilled. Our team and the opposing one was not very high-level, but there was definitely talent. There was healthy competition—ie there barely was any. No chirping, body checking, slashing, slew-footing. I was a sub only playing because most of the guys actually on the team had a bachelor party, but I tried not to botch it too bad and hold my own. My commitment wasn’t ferocious. It turns out hockey actually is just a game. This counts as a revelation.

Leafs are good and I just might skate again. Sports isn’t only a con perpetrated by obscenely rich owners who get citizens to buy them stadiums with public money then make tickets affordable only as a business write-off. The pathological profiteering of the Leafs ownership is bearable, and hardly even detectable from TV, when the team is actually run by bona fide hockey guys (Babcock, Shanahan, Lamoriello). I don’t notice the prices because I don’t pay for seats, merchandise, ACC beer or anything. Auston Matthews speaks for himself.

Maybe I’ll regain what wheels I barely had, so if I need to sub in I’ll have some juice for the third. And for shinny too.

I was onto something, surrounding myself as a kid with this game. Having puck in my life again feels wonderful!

1 thought on “Returning to Puck after India”