Indian’s love for Trudeau was palpable to me when I was there. I’d ride on the Delhi metro, people asked where I was from, I’d say Canada, and they started praising him, eyes lit up. Colleagues went pretty gaga too. Not everyone, but many.
That’s worn off, it seems. Indian media got a whiff of how thick he lays on overt shows of multiculturalism. Corny and embarrassing, he made an exhibit of himself. You can wear Indian garb without drawing too much attention to yourself. Trudeau wore juutis to meet SRK.  It’s hardly apocalypse, though. Just clothing. I’d rather have a leader who tries too hard to appear multicultural than one mostly silent in the face of Muslims being lynched, or another who is soft-on-Nazis. 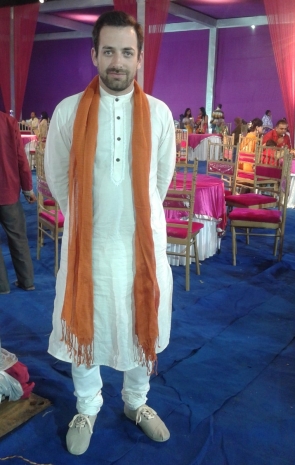 The author at a wedding in Delhi, February 2016.

Oddly I’ve just been reading Khushwant Singh’s old essays on the roots of communal violence in Punjab. The Atwal episode is indeed strange and unjustifiable– a mistake was made. There are questions not just about how Atwal got invited, but about how he was suddenly allowed to enter India, when Jagmeet Singh was denied a visa. More will be learned about this. Right wing Indians suspect Trudeau’s government covertly supports Khalistan independence. I doubt Justin knows what that is. Likewise, it’s amusing how the attack dogs in conservative media here are suddenly experts on Khalistan.
While Trudeau’s India trip went stunningly bad, it’s not like the stakes were very high. What would real ties with Modi–the Hindu nationalist killer of gujarat–look like? What was to be gained here was relatively low in dollar value, high in cultural exchange between nations with a strong, historical fondness for each other…ie a great trip for Trudeau would have brought about results mostly symbolic anyway. India’s economy has lost its sheen post-demonetization/gst and Nirav Modi has the spotlight back on ol’ fashion crony corruption. Trudeau is in Delhi now with Hayley Wickenheiser and Ladakhi hockey players on an exchange–My loves, combined! Canadian Ice hockey and not just India but Ladakh coming together, it’s a warm thought.

Modi has less to gain than Canadians may think by posing with Trudeau. They each represent countries that get along well, apart from that they have nothing in common. Some from India’s right celebrate trump’s birthday by eating cake in Jantar Mantar. Trudeau may be more useful as a person to be distanced from. Not even his worst detractor here will call Trudeau a strong-man leader. Modi’s coolness wasn’t an accident, but the Canada-India cultural connection is too strong for him to sideline Trudeau altogether. They hugged in the end.
But Modi ran to the airport to hug trump the instant he landed because he feels a kinship with a leader who also leads via personality-cult and fascist tendencies. And trump has new condos to sell in India, so he pretends to care about India. Indeed, trump Jr is in India right now talking with billionaires, to try to get their money.  Trump backs India enough to hug Modi and do the photo op because it suits his personal economic interests, but will deny H1B visas to Indians seeking to come to America because ultimately they’re not white.
That’s my view of things, from the vantage of TO. By the way, I love and miss you India!! Reminder: a country is much, much more than its leader. Indeed, national leaders almost never reflect their country’s actual inhabitants. 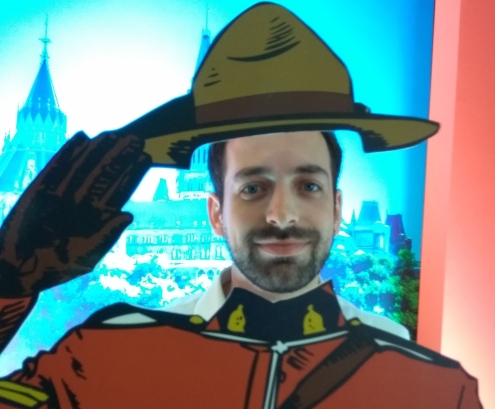 Canada at 150 in New Delhi at the Hyatt Regency Hotel.